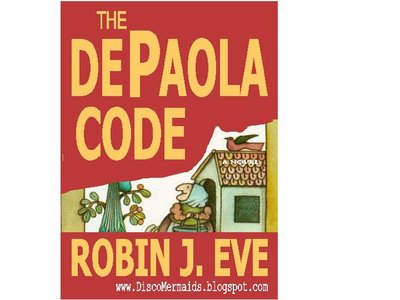 Unlike The DaVinci Code, we will not spill the secrets of the Priory of Sion. We will not expose the influence of Opus Dei. We will deal with a much more restrained group...the Benedictine monks. Popular belief portrays these men as the silent type (though they have been known to break into some rockin' chants from time to time). But these monks have a secret. A secret cloaked beneath a veil of…well…a veil of itchy brown fabric. And one man holds the key to unlocking that truth for the rest of us.

The DaVinci Code says that Leonardo had the inside scoop on a religious secret, and that he encoded his paintings in the hopes that future minds will discover that secret. But does an artist’s paintings need to hang in the Louvre to be studied for hidden meaning? No. Illustrations encoded with holy secrets might be found in the Eric Carle Museum of Picture Book Art…or even at your local public library.

We, The Disco Mermaids, are in the process of discovering a new religious secret. And we refer to it as: The dePaola Code. Tomie is one of the foremost illustrators of children’s book art...and Tomie has a secret. A secret, we believe, he wants to tell. It is known that Tomie once explored becoming a Benedictine monk at the Weston Priory in Vermont…but walked away. Why? What did he discover within those monastery walls? Well, we're not entirely sure, but it must have been huge!

Based on clues we will present in the coming weeks, we believe that you, too, will become a believer.

Thanks for this morning's laughter, Jay. :-D

Glad you liked it, Pam! But stay tuned, over the next couple of weeks we'll decipher some of Mr. dePaola's most famous works.

I can hardly wait, you wild mermaids, you. This Big Question has my scratchy brown panties in an enquiring-minds-want-to-know wad.

This is funny. Thanks for sharing!