For the past several months, I’ve been seeking a new hobby to occasionally distract myself from thinking about books. I have a habit of getting a tad obsessive, whether it’s about writing a new book or promoting my last book. And while that obsessive quality can be good, it also makes my brain feel like it’s been tossed into a blender at Jamba Juice. (Anyone for a Jay Jubilee with a wheatgrass shot and an Immunity Boost?)

Problem was, I only considered hobbies I could do by myself. But when I tried those, my mind never fully focused on that new hobby.

As you may remember, last week my wife and I headed into a studio to begin recording a dozen of her original songs. And for three-and-a-half hours, my mind never wandered from that studio.

It was the first time since high school that I played guitar with a live drummer. The energy created by a living, breathing, pulse-pounding metronome is un-frickin’-believable. On that first night, we recorded drum tracks to four of my wife’s songs: Stranger, In This World, Sunshine, and What About Me?

The drummer played in a soundproof room all by himself, communicating with us through microphones and a large window. In our room was the sound engineer, my wife, and me. My wife played her dumbek (a handheld drum) and sang, while I played the guitar. The drummer could’ve recorded his tracks without us, but you get a much more powerful and emotional sound when musicians feed off each other.

In fact, it’s a lot like writing. Anyone can write alone, but when you…

Wait! Does anyone else hear the whir of a high-speed blender?

Okay, back to the music… 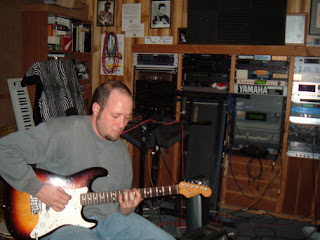 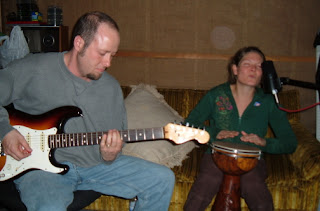 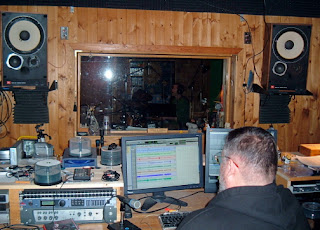 Drumroll (through the window)
** two points if you can spot a copy of Thirteen Reasons Why **
- Jay
Posted by Disco Mermaids at 10:40 PM

I see the book. Lower left side of the last picture, on the counter. I also see an orb. Extra points?

I see it! Bottom left side of the picture. :D Looks like Hannah's head.

Sweet! What a fun couple-y activity for you guys!

To the left of the old guy.
Two points please.

So that's six points so far...and one warning. Susan, you're not allowed to look for things that I haven't asked for.

That said, three points will be awarded for the color of my guitar pick.

In the reflection in the window...I think I see the Virgin Mary. Anything for that?

And Robin, I think I'd lay off the acupuncture.

hi, Jay, sorry I didn't know where to leave a note, but I just finished your book, "thirteen reasons". I loved it. I couldn't put it down. it took 3 hours (including an hour I was at work and had to put it down every five minutes, how unfair). I loved loved LOVED your book and can't wait to read more!!! -Aimee "The Great"

But I'll still hand out points just for the fun of it. 5 points if you can identify that blue thing on my wife's sweatshirt.

Okay...blue thing on your wife's sweatshirt....

I am gonna go out on a limb here and guess that she must be a trekkie! Because that looks like the star trek logo perched up there.

It's Jay's blue guitar pick of course! How sweet of her to hold it for you while you play with your red one ;-)

Nice try, Katie, but...nope. It's an "I Voted" sticker from Super Tuesday.

Unfortunately, my patriotic honey cancelled out my vote. Oh well.

What happens if I find Waldo?
Do I get a free CD when it comes out?

i see Thirteen Reasons Why in the bottom left next to the microphone. are you sure you're not still obsessing, jay?

but, unfortunately, i don't get any points. :[