Last Sunday, my wife and I arrived in NYC at 7a.m. Thankfully, the hotel allowed us to check in early. My wife took a nap while I headed down the block to BookExpo.

I spent most of my time hanging around the Penguin area and got into some goosebump-inducing discussions with booksellers who’ve read galleys of Thirteen Reasons Why. It doesn’t officially come out for another four-and-a-half months, but I want it out now!

I also hung out with the Listening Library people. Kelly Galvin (my publicist) has a mighty impressive spiel about the benefits of audiobooks. And the cool thing is, I had a chance to impress her, too! Mid-spiel, R.L. Stine walked by. I approached him, shook his hand, and introduced myself. He happened to be halfway through reading my book…and was lovin’ it! When Mr. Stine and I parted ways, Kelly said, “Did you just walk up to R.L. Stine…and did he just say he was reading your book?” To which I nodded, then nearly passed out. 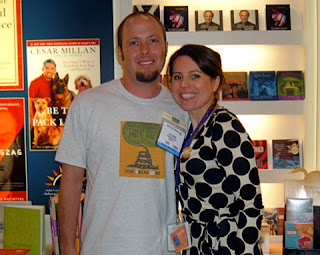 Me & Kelly
Sarah Beth Durst snapped the picMonday morning, Rebecca Bullene (my editor at Listening Library) took me to breakfast. We had a fascinating discussion about what makes a good audiobook and what doesn’t. And we both agreed that we could easily talk about the ins-and-outs of this business forever!

Then Kristen Pettit (my editor at Razorbill) took me to lunch. Ever heard of Manhattan clam chowder? It uses a tomato base instead of whatever that white sauce is…and it’s goooood! I’ve spoken about Kristen before, so if you wanna know what she’s like, just read this. (You'll love her!)

Tuesday morning, I visited Betsy Bird. Never heard of her? What about Fuse #8? Yep, that’s her! And this is us… 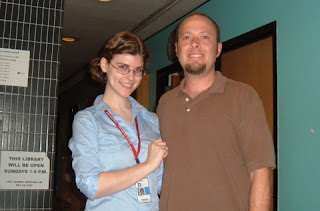 Does she know how to pose for a picture, or what! Someone needs to start a H.L.O.C.L list, cuz it’s long overdue…and librarians hate the O-word.

From there, I went straight to the reason for my NYC trip…the recording of my audiobook. On Day 1, I heard 7-pages worth of Joel Johnstone narrating the voice of Clay Jensen, my main male character. I sat in a tiny room with Orli Moscowitz (the producer), John Dylan Keith (the sound engineer), and Scott Creswell (the director), with Joel sitting in an even tinier soundproof room. 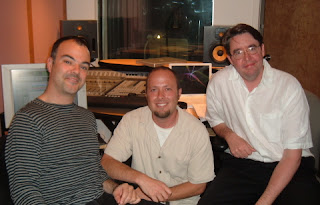 John, me, and ScottHere’s how it worked: We all had manuscript pages in front of us. Joel would narrate, Scott or Orli would catch a rushed or slurred word and ask him to repeat a line, or ask him to repeat a line with emphasis on a different word, and John took notes to keep track of takes and a million other details. What did I do? I smiled…constantly. Joel is Clay. While I wrote my book, his voice was the exact voice I heard. The dude's a star! 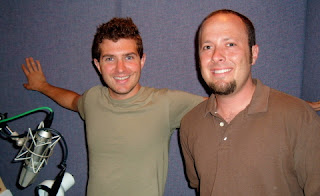 The Voice & The Words Then Orli walked me to Random House (which owns Listening Library and has an awesome lobby o’ bookshelves). She took me into a room full of audiobooks and wouldn’t let me leave until my arms were overflowing. She also gave me an Advance Reading Copy of a little book whose audio version she’s working on now…Love, Stargirl!

The next day included an event I was both excited and nervous about…a Meet the Author Tea at Penguin. Why was I nervous? Because I was the author. When Kristen introduced me, everyone in the room started applauding. And I, being the manly man that I am, grit my teeth to keep back the tears. In that room were the people responsible for taking my manuscript and turning it into a Book. Kristen started by reading e-mails she’d received from booksellers who’ve read my book…as well as an amazing e-mail from R.L. Stine, who finished it that morning. Then everyone lined up to introduce themselves. The marketing and sales people. Foreign rights. The website and jacket artists. Okay, go grab a thesaurus that includes photo illustrations. Now look up beautiful, kind, creative, enthusiastic, and kick-ass. Aren’t they adorable?

Then Kristen and I went into the office of Ben Schrank, President and Publisher of Razorbill. Gulp! I felt like I was going to the principal’s office. Throughout the entire process of bringing my book to life, he’s been like the great and mighty Oz. Kristen would say things like “Ben says…” and “Ben thinks…” But I shouldn’t have been nervous, because the great and mighty Oz is…what’s a poetic way to say frickin’ cool?

Kristen and I then grabbed a taxi and met my wife outside the studio for Day 2 of the audiobook. This time, we were there to hear my main female character, Hannah Baker, brought to life by Debra Wiseman. We came in mid-recording, so I didn’t get a chance to meet Debra before I heard her…which created an eerie sensation. In my book, Hannah's recorded several cassette tapes, detailing the reasons she chose to end her life. It felt like we were actually eavesdropping on Hannah while she was making those tapes. Talk about freaky! I’ve heard picture book authors say that when they see the final product, they’re amazed at how the illustrator brought their words to a whole new level. Well, that’s what Debra was doing. The words coming through the monitor weren't the words I wrote. They were better than the words I wrote. 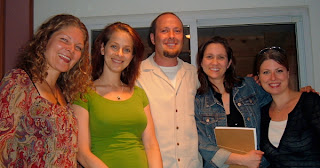 My wife, Debra, me, Orli, and Kristen
I love my life! Somehow, in the midst of doing all that “book business,” my wife and I managed to squeeze in visits to the Metropolitan Museum of Art, Ellis Island (where George W. Salinger stepped off the Lusitania so I could form the Disco Mermaids 96 years later), the Museum of Jewish Heritage, the Cathedral of Saint John the Divine, the Empire State Building, a swing dance club, and two Broadway shows (The Lion King and Chicago). 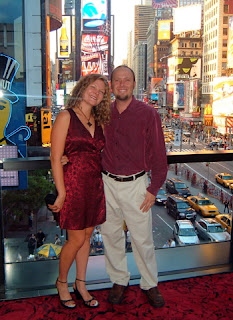 But I’m back in California now. I’ve got a load of laundry in the dryer, I’ll empty the dishwasher once I’m done with this, then I’m heading to bed.

Thanks for sharing the details, Jay! I'm so excited for you, and can't wait for the book!

Jay- I so appreciate hearing about your whirlwind of a week. Amazing how so many of us don't even "know" you but are kvelling at being able to eavesdrop on your journey.

Thanks for the play-by-play and now I can't wait to read and LISTEN TO your book....

(don't forget to separate the whites and colors!)

Wow, Jay, all sounds wonderful. Pics are gorgeous. You have such a way of putting us right there. October is too far away...

OMG! The trip sounds better than I imagined and I even got chills reading your post. Jay, not that my puny opinion counts for much, but since I haven't talked to you since I finished your ARC, I needed to tell you: you are wicked awesome and the book (which Eve and I discussed at GREAT length in her hot tub) is going to astound the world (literally, the world!). I mean it, it's like nothing I've ever read and I read A LOT. Aside from the unique structure, I really don't understand how you got into the mind of a teenage girl so well and brought the entire tale so to life. And, I REALLY like the ending. I could go on and on, but I won't.

P.S. Sorry for all the capitals - it's very hard to show my excitement in writing.

We missed you! But it certainly looks like it was worth it. (RL Stine, dude!!)

And while you were watching Chicago on Broadway, I was watching the late night movie Mean Girls on TNT. Aaahhh...reality.

Still wished you would've snuck us in your bag. Maybe next time!

P.S. Your wife looked smokin' in that little red dress!!!

Even though I've talked to you 500 times since you've been home, reading this post made it all so real for me. Like it's happening to me, too. When we met years ago, I could never have imagined how huge this whole experience would be for you. I mean, I knew you'd be successful, but this is craziness!

You deserve all this attention/applause/praise more than anyone I know. CONGRATS again...so glad you took the trip. I love how you surrounded yourself with hot chicks throughout the week. Good move. And you and JM look so dang cute in your little matching red outfits!

I love NYC! Glad you got to squeeze in non-publishing stuff too, but you must be exhausted!

We are all living vicariously through you! You've made it to the big time, Jay! Thanks for sharing the moments with us.

And your wife is a hottie, too!

What a fabulous trip!

this may sound goofy coming from an internet acquaintance, but when you described gritting your teeth so you wouldn't tear up, I teared up.

And I am SO looking forward to reading your book.

So where did you stash that picture of you writing drivel that nobody will ever record, read or even see? I've checked my attic and it's not there.

I got butterflies reading your post - so very , very cool.

PS: Robin, I watched Mean Girls that night too in Santa Barbara! Get out of my head man.

Fantabulous, Jay. And best of all, you remembered the most important thing -- to mention food. No, wait! I mean to enjoy it all. Cuz really, this is what your years of hard work were for, ya know?

But you didn't review the shows! How can anyone know what to do when they go to NYC but don't have all those pesky little work things to deal with???

The Lion King: visually brilliant. The creativity that went into the costumes and staging was worth the ticket price.

Chicago: the movie is one of my faves cuz I love the music and story, so I was fascinated by the energy and simplicity of the stage show (the live band was a part of the set). And Joey Lawrence played Billy Flynn (Whoah!).

But you're mistaken. The most important thing is to bring along a camera. Unfortunately, I was so overwhelmed at Penguin that I didn't take any pics...and I'm kickin' myself for that.

Wow, Jay...WOW! But speaking as someone who's read your amazing book, I can say that as magical as this NYC trip was, it's only the tip of the iceberg, baby! Once the rest of the world gets ahold of that book--well, let's just say your wife can start that dress/shoe shopping spree now (loved the red dress, btw!).

Jay, you are a ROCK STAR! And it seems to me, it couldn't happen to a nicer guy. Thanks for letting us live vicariously through you!

Wow. Thanks for this.

It seems rude to ask for more, so maybe Robin or Eve would like to take on this meme. I was tagged by Laura at Wordy Girls, and now I'm tagging you for an 8 THINGS ABOUT ME meme.

You can see details here.

I am so glad to hear that the audio book will have both narrators represented, rather than having one narrator for the entire thing. I think it's fairly crucial to have the two in this case.