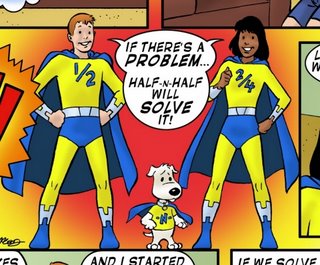 What you’re looking at is the newest “gig” Jay and I have been working on. Jay was asked by UCLA’s education research department to write entertaining assessments to test middle school students about algebra concepts. He brought me onboard because I used to teach algebra and I actually understand this thing called “math.” We hired Eve as our official cheerleader because she's always looking for an excuse to shake her pom-poms.

Then the folks at UCLA said, "Could you have your illustrator do it in a comic book style?” Our first reaction was…our illustrator!? I mean, Eve is a great artist, but she’s too busy jumping around yelling cheers. So who did we turn to? Our good friends at SCBWI. We got on the message board and sent out a holler for any illustrator who might be interested in illustrating algebraic equations with comic book characters. “We’re doomed,” we said to ourselves, often and repeatedly.

But we weren’t. By some miracle, that little query found its way to the eyes of one Mr. Bob McLeod. The dude has illustrated for Spider-Man and X-Men and, coincidentally, just published his first children’s book called SuperHero ABC (which also happens to be my four-year-old’s newest favorite book…it’s totally wonderful). Mr. McLeod is a new member of SCBWI and was glad to take on the project.

“Ohmagod, Ohmagod, Ohmagod,” we said often and repeatedly. Once we got over being star struck, we were able to move on to the task of creating a visual and fun way for kids to learn algebra. “So how did that go?” you may be wondering. Here’s my answer:

Eve is in the background right now jumping into splits and spelling out D-I-S-C-O-M-E-R-M-A-I-D-S! We love your enthusiasm, Eve.

(Check this out! It's our first 3-page installment of The Adventures of Half-N-Half and Their Dog Rexagon!)
Posted by Disco Mermaids at 12:06 AM

After looking at the finished pages - now I want cupcakes - and it's not even lunch time! Congrats on the project . It's not easy mixing humor with the learnin stuff - but by the looks of things you aced it. Rexagon - a sense spinoff!

And two guys can work together really well - after they come back from lunch.

Looks fantastic! I abhor math and the story and artwork kept me reading.

Nice, fellow DM's. Very nice. I like how you include me in the blog post even though I had nothing to do with the project. But you know I'm always shaking my pom-poms (Fergie-style) for the two of you. I'm your biggest fan!

Congrats on that and don't forget your roots when you are big and famous in the Manga world. How 'bout using some Disco Mermaids as your next characters?? We could solve equations about, um, how many dance moves we need to win the costume contests and stuff.

Oh, dear, Jay. Greg says that if you take some Fab laundry detergent and sprinkle two 0's in it you'll get five exclamation marks on your pants.
At least, that's what happened to me.
-Robin

Wow! If they'd had this when I was a kid I might have actually understood and enjoyed math...

But alas...instead I had to become an author...

This is so fantastic. I love it!!!

Robin, when I first read this post last week (at the end of a long workday), I had a really funny response/comment. However, for reasons that are totally unclear to me, the I.T. department at my (tax-payer-funded, Freedom of Information Act-subject) office had BLOCKED my ability to comment on blogs! Can you believe it? Anyways, I steamed out of the office and went straight to a conference (which was not nearly as fun as the SCBWI one, 'cuz, you know, it was about the death penalty), where I did not have internet access, and promptly forgot my response. All that to say, I got nothin' for you except I remember I laughed when I read it! Pretend I posted a great comment that inspired you and Jay to kick some more ass on your collaborative projects. Lamy